Do you need to hire charter aircraft departing from the Metro Detroit area? Aargus Air Charter offers a variety of aicraft in type, speed and cost, from a business jet down to a light piston twin, to fit most any mission. We can be in postion at your selected departure airport within few hours from the time of a request. Just contact our office... Aargus phones are manned 24/7. Call us and we will provide a quote for your trip and on your acceptance, make arrangements for the flight.

Or, if your trip is not immanent, get a quote online from this website by clicking this link (charter-flight-quote) in the upper left corner of this screen and get the quote by email. Or, you may call (734)786-1312 or 888-431-0705 and one of our charter reps will handle your request. Based on the information that you give, they will identify the best fit aircraft to the logistics of your proposed flight and there is no obligation or cost to get a quote.

Aargus Air provides air charter service from Detroit area airports, using as primary, the Oakland County /Pontaic Airport. We prefer Pontiac over other airports in the area such as Detroit Metro and City Airport because it is much easier to get in and out of air traffic-wise and access fees are comparably modest. We will pick you up at whichever airport in the Detroit Metro area is most convenient for you and take you to your destination city. Air charter has never been more easy. Should you need a rental car or taxi-cab at the arrival airport, we will have one waiting for you. 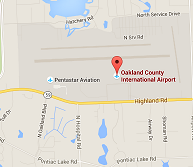 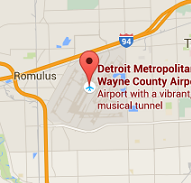 Detroit, famously known as the 'Motor City, is located in the Eastern half of Michigan on the Detroit River between Lake Huron and Lake Erie and is the largest ciy in the state. After 80 years of automobile design and manufacturing, the automotive industry still dominates employment in the area. From a population of close to 20,000,000 in 1950, the Detroit proper poplulation has halved with a current count of approximately 850,000. This is due to a varirty of factors, but primarily to the process of automotive production outsourcing to offshore vendors, particularily Mexico. This has caused a severe decline in jobs, reducing the City's tax base to a level of contributing urban decay. Surrounding suburbs such as Bloomfiled Hills and Gross Point are very wealthy enclaves surrounding Detroit and much of the City of Detroit's populuation has migrated to these and the many other towns and villages outside the city proper, or simply left the area completely..

Detroit is the oldest of the major cities West of the original founding colonies and the only city in the US that would have you traveling to the South to enter Canada. Began as a fur-trading town in the 1700s, Detroit took advantage of its perfectly positioned geographical location in the 1800s, becoming a major shipping and manufacturing center. With an influx of workers from overseas as well as the Southern part of America, including many African Americans, Detroit was an industrial giant in the early part of the 1900s. During the course of World War I and II, Detroit was a leading provider to the military effort. The birthplace of the automobile and the home of the "Big Three ", Ford, Chrysler and General Motors, Detroit remains the center of the automotive industry despite competition from Europe and Japan. One of the largest manufacturing and production cities in the U.S., Detroit is a leader in , fabricated-metal, food and beverages, steel chemicals, paper related products,.

The health care industry is also among the city's largest employers. There are also a few post-secondary colleges in Detroit, such as Wayne State University, The University of Detroit Mercy, Marygrove College, and the College for Creative Studies. Other educational options include enrolling in an online school. These institutions can help people earn degrees in communication, business, psychology, and social work.

Detroit Culture, more than any other single city in the country, has contributed greatly to the early days of rock 'n roll and R and B music, yielding such great names in as record producer Berry Gordy, creator the Motown sound in the 1960s, with legendary Detroit artists such as Stevie Wonder, Smokey Robinson, the Supremes, Marvin Gaye, and the Temptations. Aside from Motown era artists, the seemingly endless list of Detroit musicians reads like a who's who in music, with Aretha Franklin, Madonna, John Lee Hooker, Wilson Pickett, Bob Seger, George Clinton, Anita Baker, Iggy Pop, Eminem, Alice Cooper,and Kid Rock.

RESTARAUNTS AND OTHER ATTRACTIONS

Detroit has meny fine restaraunts and other interesting attractions.

Other things to do in Detroit, MI

When our airline flight cancelled, we were stuck. We called Aargus Air and they arranged to get us to our father's funeral in Kentucky on time. Cali & Brett Y..

If you have a trip in mind, let us quote it for you. It costs nothing to find out a cost.